When our two workshop days at Foundation Hardt were over, I realized that I had not left the grounds of the villa since we arrived. The breaks between work-hours and dinner had been too short to do anything else than rest, and besides, a slight Zauberberg-feeling looming in the beauty and secludedness of our temporary home made it seem too big an effort to exit the gates. I had not seen much of Geneva and its surroundings on the way here – from the taxi, I had only caught a glimpse of the lake, the mountains, the city quarters, the square cobolt-blue suitcases in the Prada shop window. I had no particular idea of exactly where we were or how to get into town, I hardly knew in which direction the lake was, and the large trees in the small park screened away any view apart from some shady Alps just seen from the terrace. My world was defined by the high walls over which figs, kiwi and grapes clung and cascaded; soon after dinner the sun set and the August darkness put everything to rest. It was perfect for our aims, but when the concluding discussion on the last workshop-day was finished, everybody suddenly felt the need to escape outside. 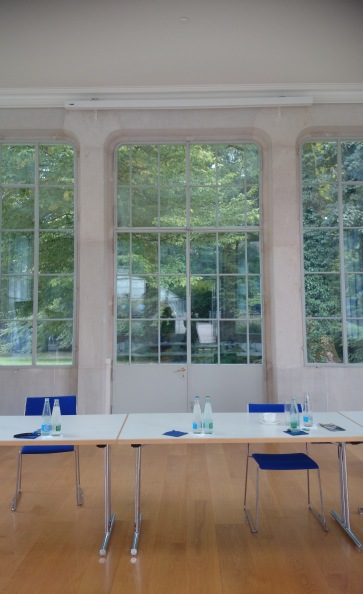 It was sunny, yet still cold. The orangery of Foundation Hardt, where the formal parts of our workshop were held, lay in the shade in the far end of the garden, and the sun never quite got to warm its stone walls. While the high trees had been gently waving their green cloaks far above us, filtering light and sprinkling shadows through their leaves, we had been struggling with our texts and definitions, our questions and our conclusions, and when I later saw the orangery from afar, it was as if our discussions still presided there, and our thoughts floated under the ceiling. The orangery had changed from a place where something was about to happen to a place where something had happened, a place where we had met, and thus immediately had gained importance from this fact. And maybe just because of that we now felt the urge to wander. Some of us would leave already the next day, so time was short. Some were going at once, some were to meet at twenty to six, some decided to stray away somewhere in between, but the one goal everyone wanted to see was the Villa Diodati (for the legends of Villa Diodati, see previous blogpost here). As in a confusion comedy, we all crossed each others way somewhere on the short distance to Villa Diodati: I met Sabrina and Stefano at the meadow with the splendid view near the villa, we spoke for a while about Frankenstein and Mary Shelley while the boats went back and forth on lake Geneva below us; when my friends had left, and I headed home, I met Frederick, Mikael and Anna on their way down.

I went alone to Villa Diodati, because I wanted to encounter it alone. I wanted to gain my first impressions of it without company; I wanted a tête-à-tête with this possibly enchanting place. But when I found the gateposts with the name of the villa engraved upon them – just as I had seen in photographs – and saw the villa itself, just another villa with a lake view, I felt nothing in particular. It was beautiful, but it did not speak to me – I beheld its beauty in an objective way, but my inner feelings were silent. The lettering on the gateposts was the only thing that gave the place any personality. I took a picture of them and went away. 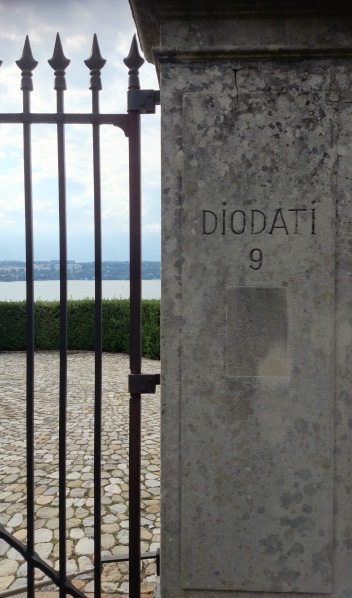 I have often thought about why some places have such an effect on us, and why some don’t, and I reflected on that again when walking back from Villa Diodati (more hastily than I would have wanted, in order not to miss dinner at 7). I have thought about why we expect, or hope, to feel when we encounter monuments and sceneries, and what it is that we expect to feel. Guidebooks and travel literature overflow with assertions of emotions and instructions for being overwhelmed. It would be a severe fault to stand at a view-point in Rome and to feel nothing. To see, and to feel; to see something never seen before, something more beautiful or more grand than ever before, and to respond to that with the proper emotion. Already the guidebooks of the 12th century assure that the buildings in Rome are larger than any other, and that the ancient marble sculptures are so lifelike that they seem to breath. Thus, it seems that travellers want to be overwhelmed – what would the point of travelling be if one remained totally indifferent? But often, grand buildings just make us feel small, and beautiful sceneries make us feel insignificant. Or we just don’t feel anything, take a photograph and leave. Since I so often have pondered over this, both during my own travels and within the Topos and Topography project, I no longer get disappointed when my feelings fail to show. I just register the fact that this experience did not strike me; not this time, not at this hour, maybe next time, maybe never. I have learnt that these particular feelings cannot be predicted, and that their fashion of showing up quite unexpectedly in fact forms part of their impact.

I recently read an article in Harper’s Bazaar where the author described a visit to the musealized home of the Brontë family. ”I didn’t mean to be a pilgrim”, it starts, and neither was Erica Wagner, who wrote the article, a particular fan of the Brontës. But when she saw the tiny writing desk of Emily Brontë, she was hit by emotion, and surprised by her reaction, because she had not expected it. She was affected. When I read that, I remembered a similar experience of mine when visiting Sissinghurst, the home of writer Vita Sackville-West, who happens to be one of my great heroes. Sissinghurst is today famous more for its garden than for its former inhabitant; I did expect the garden to be beautiful, but did not expect to meet something of Vita herself there – the memory of her was kept in her books, and in the books about her, I thought. The garden was beautiful and stunning, but when I climbed the stairs of the fairy-tale brick tower which hosted her library and writing room, with every step higher I was overflown with emotion. Even before I had stared through the fence into her dark library with all its books and works of art, even before I had seen her little book stand, and a bunch of flowers put there by some loving invisible caretaker, I felt that I approached the person Vita, that she was there, and that climbing the stairs of her tower was like entering her mind and existence. I was taken by surprise, just as the unwilling Brontë-pilgrim, and I did not know what to do with this sudden overwhelmedness, so I took a photo and went away, as I did at  Villa Diodati – but in that case, the photo is all I keep, while from Sissinghurst, the memory of my emotions will last, and the photo, which I found in my Dropbox archive, becomes unnecessary. 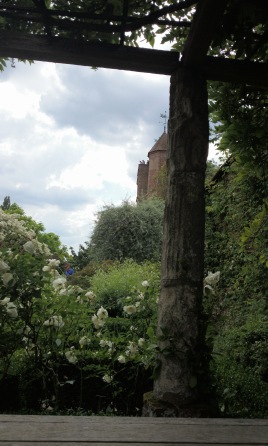 The tower at Sissinghurst, seen from the garden. 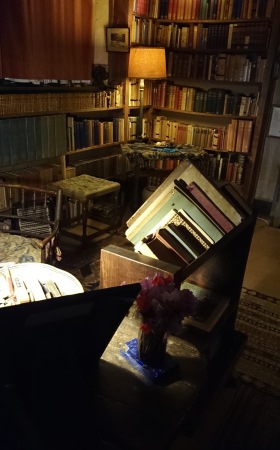 The library of Vita Sackville-West.

The places, and what they do to us when suddenly a connection is made. It happens so fast, and it happens so slowly. It happens when we are alone, and it happens in the middle of a crowd. Sometimes, the very fact that we have been together in a place charges it with this connection; sometimes, our emotions erase everything and everyone around us as if we were alone with our monument, even if we stand in the most frequented sightseeing spot in the world. If I return to Foundation Hardt, the orangery will forever keep the memory (just as in some old evergreen song) of our workshop there, and our journey together through a cold summer in Switzerland. On our last dinner, in a speech when the crème brulée was half eaten, one of our invited guests read the following quote aloud from Madame de Staëls Corinne, or Italy (1807):

”When Oswald and Corinne set out the next day, they were confident and at ease. They were friends who were travelling together. They began to say we. Oh, how touching it is when lovers say we. What a declaration ot contains, shyly and yet eagerly expressed! ’So, we are going to the Capitol’, said Corinne. ’Yes, we are going there’, replied Oswald, and his voice was so sweet and tender that it said everything with those simple words. ’The top of the Capitol as it is today is the place from which we can easily have a view of the seven hills’, said Corinne. ’Then we shall explore them, one after the other. There is not one of them which does not preserve some traces of history.’”

I was so touched by this that I almost shed a tear on the crème brulée. It was the perfect quote. We had been sitting in an orangery in a garden in the middle of nowhere, we had been discussing Rome and travels to Rome, we had been travelling together, and all this hade made us into a we, but had also made the orangery into the monument of our experience and the vessel of this memory. But to someone else, it would just be an orangery – beautiful, and certainly worth taking a photograph, but then go away.