The time has come to conclude Itinerary VII, and to make our way from S. Maria Maggiore to reach our goal, Porta Praenestina, or Porta Maggiore as it is called today. From piazza Santa Maria Maggiore, via Merulana will lead us down to the axis of our itinerary, along the ancient clivus Suburanus, about which you can read in the preceding blog posts. When we find via S. Vito to our left, we are on our way again, and soon, the beautiful sight in the image below will meet our eyes.

The church of S. Vito and the arch of Gallienus / porta Esquilina (Wikimedia Commons)

This little gem, joining together antiquity and the Middle Ages in a bracelet of marble and brick, hides in this little street away from the busier areas of this part of town. The church is S. Vito and Modesto, also known as S. Vito in Macello. It is first mentioned as a diaconia in the end of the eighth century, just around the time of our the manuscript of our itinerary, which shows that the street we are walking was an important and frequented neighbourhood then, and that all of the pilgrims and visitors who strode around in Rome after the instructions of the manuscript sooner or later passed by S. Vito. In the centuries to come, however, this area lost importance and the church fell into ruin, to be restored in the 15th century by pope Sixtus IV.

The arch to which the church clings is called Arco di Gallieno, since it was rededicated to emperor Gallienus in the third century CE; the structure of the gate as seen today was built already under emperor Augustus. But the story of the gate goes way much longer back than that. This is one of the most important city gates in the old city walls of Rome, the so-called Servian wall, named after the Roman king Servius Tullius, who is said to be the first to include the Esquiline hill onto the city of Rome. The walls were constructed several centuries BCE in heavy and rough blocks of tufa stone, parts of which still are visible for smaller stretches around the city center. The circumference of the Servian wall was much smaller than the Aurelian wall built in the third century CE, and the ultimate ritual for any antiquity-aficionado would of course be not only to walk along the entire Aurelian wall (which, I am informed, takes about a day from dawn to dusk), but also, shorter but more challenging, to encircle the almost exstinct Servian wall through the more modern quarters that later have erased the better part of it. (See a rudimentary plan of the two walls here.)

The Einsiedeln manuscript does not, though usually attentive to inscriptions, report the inscription on the gate with the dedication to Gallienus (CIL VI.1106).

We reluctantly now must move on, but let’s take a last glimpse of the church and the arch though the eyes of Giuseppe Vasi in the 18th century: 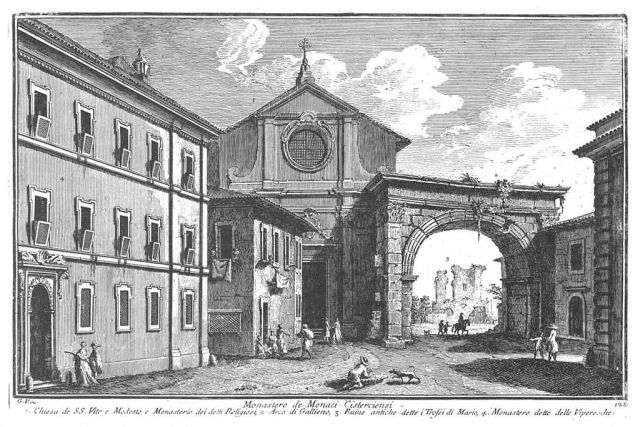 The manuscript now calls our attention to Forma Lateranense – Forma, as we have seen, is medieval Latin for aqueduct – and Monasterium Honorii, but as these monuments are quite far from our itinerary, and also will recur in Itinerary VIII, we pass them by, and continue instead straight ahead towards Nympheum. And when walking along, we soon find ourselves in front of the large, busy late 19th-century piazza Vittorio Emanuele, surrounded by modern porticoes filled with shops and bars. It is actually the largest piazza in Rome, and its midst is occupied by a quite shabby park, and – our Nympheum. The large heap of bricks that towers over the west end of the piazza is the remains of the Nympheum Alexandri, a huge fountain built by emperor Alexander Severus in the third century CE.

A curiosity is that two marble sculptures from the fountain, representing war trophies, and commonly called the Trophies of Marius, are now preserved on the Capitoline hill, though in the shade of the sculptures of the Dioscuri placed at the top of the stairs and beginning of the piazza. Don’t forget to look for them, and to give piazza Vittorio Emanuele a thought when you do. 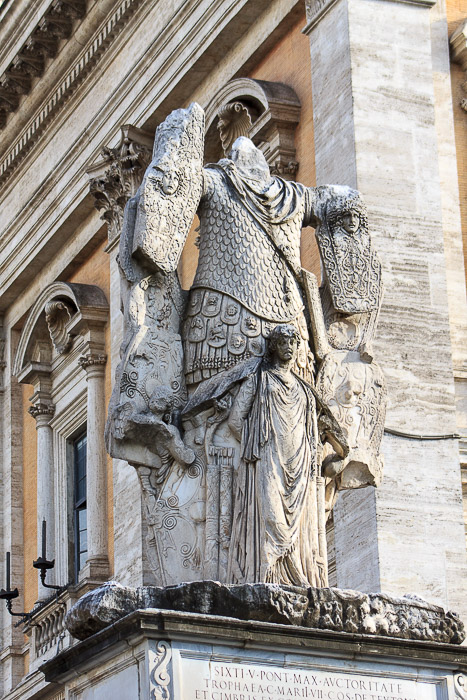 One of the trophies on the Capitoline hill.

Possibly, the trophies were still in place on the monument in the time of the Einsiedeln manuscript, but that was not the main concern then. Instead, the Nympheum served as a gigantic landmark – of the type that the Einsiedeln itineraries are so fond of – at a crossroad. To the left, a way led to the church of S. Bibiana – correctly noted on our left in the itinerary – to which we will return in several itineraries to come, and so we do not have to hurry there at the moment. And to the right of the Nympheum, via Labicana led straight towards porta Praenestina/porta Maggiore. Via Principe Eugenio more or less coincides with via Labicana here, but preserves no traces either of Antiquity or Middle Ages, and is also in other respects quite uncharming – such a bore for us itinerarists, so I recommend that we instead take a tram from the piazza towards porta Maggiore.

The inside of Porta Maggiore.

And finally, we stand at our goal, the magnificent porta Praenestina/Maggiore, where the ancient via Praenestina lead to Praeneste in the east (today’s Palestrina) as well as via Labicana (now via Casilina) to Labicum in the Alban hills in the south. And as if that would not be enough, the city gate is also a knot for several aqueducts. The gate was originally constructed in the first century CE for the aqueducts’ sake – the Anio Novus and the Aqua Claudia ran straight through the top of the gate, and the channels are still visible – but was later incorporated as a gate in the Aurelian city walls. Three long inscriptions, repeated on both sides of the gate, record that emperor Claudius let the arch be constructed, and that emperors Vespasian and Titus restored the monument (CIL VI 1256-58). Our faithful manuscript immaculately reproduces the first two inscriptions – quite an accomplishment since the inscriptions are rather hard to read if the light is not perfect – but curiously leaves out the third.

We stand at the goal of itinerary VII, and the Einsiedeln pilgrim now probably incessantly would walk out through the gate to visit some martyr’s tomb or another – as for us modern itinerarists, if the light is fading as in the image above, I would rather suggest that we continue with the tram to Pigneto or Centocelle, where Rome’s most innovative restaurants right now can be found – don’t miss the incomparable Mazzo in via delle Rose! There (if booked in advance – there is only room for ten guests!), a beautiful evening awaits you as a reward for our long walk straight through Rome from west to east, before we start out on a brand new itinerary. Arrivederci!