When I arrived in Innsbruck it was already dark. Although it was mid-February, I could not feel any of that snow-cold winter air that I had been looking forward to. The train station was a modern creation, and stretched out along the railway tracks like a parking house in several levels which made it difficult to orientate. The streets were dark and rather empty even though it was only a bit after 9 pm. This made me suspicious towards every wanderer I met, and I kept my gaze steadily on the pavement and felt that they were watching me. Was this Innsbruck? It was not at all what I had expected. 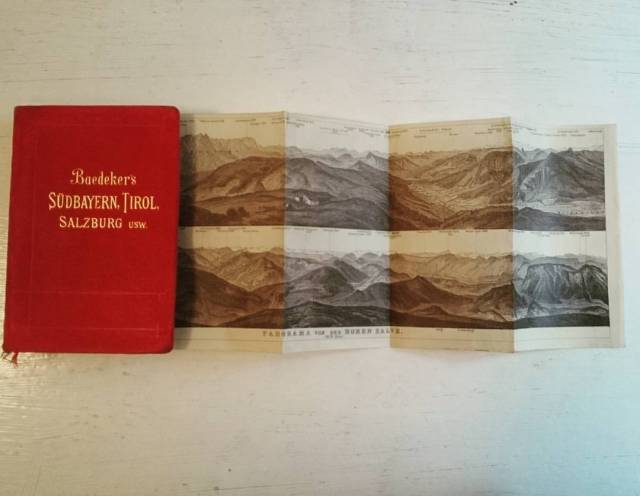 Before my journey, I had acquired a guidebook to ”Südbayern, Tirol, Salzburg usw.”, a Baedeker edition from 1908. When I opened it, I saw the owner signature of a Dr H. Genzken, Lübeck, and when I flicked through the pages searching for Innsbruck I found that the red page-marking ribbon had been set at the Innsbruck page for so long that it had left a red mark on the paper. Innsbruck! The goal of my journey. By some googling I found out that Dr Genzken had been a Latin teacher at the Gymnasium Katharineum in Lübeck in the beginning of the 20th century. I immediately felt mysteriously related to dr Genzken. Had he bought this book precisely for a journey to Innsbruck? Did he go there regularly? Did he dream of Innsbruck all of his life but never actually went there? Two hotels were underlined in the Baedeker with a thin pencil line: Arlberger Hof and Akademikerhaus, mid-priced, near the railway station. That was the only traces that Dr Genzken had made in the whole book: his signature, the red ribbon, and the two underlinings.

And now I, a Latin teacher from Gothenburg, had the book in my hands, planning to stop overnight in Innsbruck on my way to Rome just because I had always dreamt of Innsbruck ever since I started going by train to Italy some twenty years ago. But contrary to Dr Genzken – whether he stayed at Arlberger Hof or Akademikerhaus, or both, or none –  I had another hotel in mind: the Goldener Adler. And that’s where another Latin teacher, Vilhelm Lundström, professor of Latin at Gothenburg university a century ago, comes into the story. In 1909, he took his students on a two-month study trip to Rome, by train of course, and with several didactic stops during the way south, of which Innsbruck and the Goldener Adler was one. When I began looking up the history of the hotel, I was surprised to read that it was much older than I had thought: founded in the 14th century, it had through the centuries constituted The Stop for all travellers to Italy across the Brenner Pass from Kaiser so-and-so to Goethe and queen Silvia of Sweden. My Baedeker educated me even more concerning Innsbruck: it was the capital of Tyrol, an area that I previously mostly had associated, vaguely, with apple growers. At the Goldener Adler, the local Tyrolean hero Andreas Hofer had held a speech to the masses when defending the area against Bavaria and France in the early 19th century. Suddenly, there was no alternative but to stay at the Goldener Adler.

I had imagined Innsbruck as petite, picturesque, fresh. Instead, I now dragged my suitcase along streets with normal, non-picturesque, anonymous blocks of houses. I did not even try to imagine walking in dr Genzken’s or professor Lundström’s footsteps anymore. It felt like a failure, but since I thought of the whole thing as an experiment, I did not care too much. Suddenly I passed a shop window with traditional Tyrolean clothing and laughed a little to myself, because this was the first marker that I really was in Innsbruck after all. And I thought, while hesitating about whether I should take a photo or not, that the signifier is all, and reality is nothing. As long as the signifier of Innsbruck is there, it does not matter if it represents reality or not. And as I walked on, more and more signifiers appeared. First, the houses got ornamental and pastel-coloured on the Maria-Theresien-straße; then, as I entered the Altstadt, rustic vaults and stern, thick 15th-century facades appeared. Where the street ended, I spotted the Golden Roof shining modestly in the dark, one of the Innsbruck sights worth seeing according to the Baedeker, though without a star. I felt nothing particular about the Roof, reminded myself that I had read that it was from the 15th century, but I was more interested in the fact that the hotel now was supposed to be nearby. And around the corner the black-and-yellow sign ”Goethe-Stube. Abend-Restaurant mit Musik”, more brightly lit than the Golden Roof, welcomed me. I was there, at the Goldener Adler.

The receptionist was dressed in Tyrolean clothes and there was wooden panelling everywhere, as I had already seen on a virtual tour of the hotel on the Internet. The corridors were narrow, my room rather modern, but what no virtual tour would have been able to transmit was the smell of all things old: old wooden furniture, old documents behind glass (a decree of one of the Napoleons; a celebration of an Andreas Hofer jubilee; a list of early-modern celebrity hotel guests, several older oil paintings – for example a Goethe portrait – guarded by surveillance cameras), and an army of stuffed animal heads in the stairway.

I asked in the reception about guest-books from the early 20th century – I knew that Lundström and his students had signed them – but they were gone, maybe preserved in the Innsbruck city archive, right across the street but unfortunately closed on weekends. I also knew that the professor and his students had been spending their evening in the vaults of the Goethe-Stube, reading 19th-century Swedish poetry about crossing the Alps. I checked the restaurant – it was filled with uninspiring hotel guests, and I did not feel like entering. Instead, I went outside again, in the dark, to try to locate another important Innsbruck signifier: the river Inn. The hotel was supposed to be very near the bridge over the Inn that has given the city its name, so the river had to be there somewhere, and the Alps must be there in the dark, too. Almost immediately, I heard the sound of running water. There it was, the bridge, and the river, but I saw nothing in the dark, only heard its both comforting and disquieting presence. I returned to the hotel, climbed the animal-laden stairs and went to bed. I still was not sure if I really was in Innsbruck.